skip to main | skip to sidebar

I was talking to a prospective babysitter yesterday and we started talking about the kids nicknames.

Marguerite started it. Frances called her "Marshie". She's always called her Marshie. That's the nickname Frances gave her about this time 2 years ago. Though Frances also briefly called her "roary" (happens when a baby cries ALL the time) Marshie also has other nicknames: Marsh (without the ie) from Frances, Marsha from her daycare teacher, Ree Ree from Frankie (though now he calls her "Mar-GA-REEEEET!" Yes, with the exclamation point at the end every time lol), and of course I call her Marshie LuLu (why I don't really know lol I just think it's cute) or Lulu or ReeReet. And of course, the inevitable, Marguerite Elizabeth! Yeah, she's figured out she's in trouble when she gets that one.

Frank only has one real nickname: Frankie. I do call him other things like PotatoHead, Mr. Powerhouse, Bud (Bud Lite is what his father started call him, but I just can't go there lol), Loudmouth...No, I'm kidding! Though he is. And, as with all boys, there's a few other things that I can't think of right now.

Grandma nicknamed Frances "Francy" when she moved down here, but Frances really hates it. lol Her name is "Frances Audrey" thank-you-very-much! And she's the one that started that. She really prefers to be called by both names. When I really want to tease/irritate her (Hey, I'm her Mama, I can get away with that!) I call her "FrancyPants". Talk about being pissed at me! She's also: Little Miss Thang, Herself (given to her by her God-Mama Boo), Miss Princess, Sissy Frances or Francesss (drawn out like Princess - which is how Frankie pronounces her name all the time).

Robby of course gets called RobbyBobby (which his Daddy started) or my new favorite for him is Mr. Poopy. (which is always accompanied by PoopyPoopyPOOPY - Yes, I do put poopy in there four times. Hey.... you try staying around him for very long when he's filling a diaper and you'll see!) He's also Mr. Droolyface or Drooly for short, Fang (now that I can't get away with "Toothless Wonder" anymore), Little Guy, Little Bud (another of his Daddy's names for him... I call him Little Buddy when I use that one lol), and a few other assorted pet names.

I suppose it's just "My Thing". Even Desse and Steven have been subjected to some nicknames over the years.

My ex didn't want Desse having the middle initial J because he'd be called DJ. So, I purposely steered everyone away from that -- though I came home from work one day to him telling a 19 month old Steven, "DJ. Can you say DJ?" lol And yes, he was DJ until pre-k. Then he asserted that his name is DESSE. Don't call him anything else. My nieces called him BJ though -- and still do. They're 11 and 13 now. lol We're still not certain about that one.

Steven just got stuck with Stevie (my sister) and that of course lead to SteviePooh which he hated more and STILL HATES to this day. Yeah, I know all the buttons to push. That's a Mama for you.

A couple of my brothers got in on the act too. I nicknamed one "Bit" and another "Shauny". My sister is and always has been "Sissy". Yep, I guess it's just me!

I don't really know why I was thinking about this again today, but I thought I'd write it down and think about it again some more later. Just a little food for thought ----
Posted by Gail at 8:38 PM 1 comment: 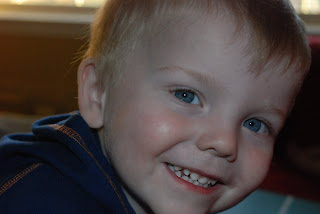 He NEEDS a haircut, but the boy has the prettiest blue eyes! I was trying to get pics of craiglist stuff off the camera, and he kept asking to have his picture taken....... 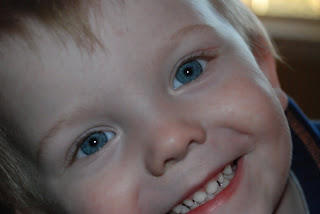 And he kept moving closer and closer. lol Still can't believe the twins are 2 1/2 already!
Posted by Gail at 8:59 AM 1 comment:

Since we moved a few weeks ago, the kids have enjoyed being outside. We're now on a cul-de-sac rather than a busy street, and we don't worry about them as much. As a matter of fact, there are only five streets in our subdivision, four of which have cul-de-sac's on each end and the fifth is the street that goes through the center and dead-ends into the fourth street. No through traffic! YAY!!!!

So I came outside to see what the kids were up to and what do I see: 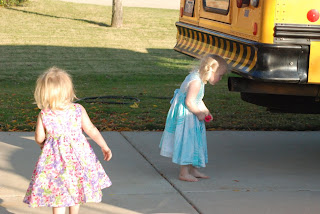 I asked Frances what she was doing and she said, "Talking to the bus, of course." She was very matter of fact about it too. *snicker*

And then... Marshie joined in! lol 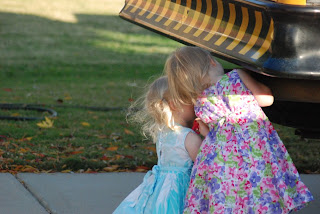 You can see why I thought all of Marshie's "soot" was from talking into the tailpipe. Even now I can't believe she was ingenious enough to figure out how to open the engine cover. I'm still stunned!
Posted by Gail at 6:10 PM No comments: 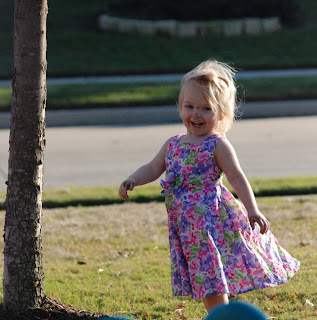 After snapping this cute picture of Marguerite, we found out what she'd REALLY been up to.....

The little turd had unlatched the inside engine cover on the bus (no small feat for us adults I might add) and started exploring the diesel engine and transmission! No wonder she's so dirty. lol
Posted by Gail at 4:18 PM No comments:

I think this may become a regular blog post for me. She comes up with the funniest things!

Frances: Look! Look! Mama, that car tripped. (She was pointing to a car hooked to a tow truck - on the freeway. The front tire and fender were hopeless bent in.)
Mama: Oh really?
Frances: Yep, look, look, it tripped and hurt itself. See the boo boo? Look! LOOK!!
And of course I was giggling by then!

Then we get home and she says: Mama! Look, there's a crab on my slide!
Me: (thinking it's a bee or spider): Hey, don't go near it. It's not a crab.
(As I'm walking towards the slide) F: Yes it IS a crab! You can see his claws!!!
OK - upon further inspection I realized it was just a cicada, but she's still insisting it was a crab. lol

The following picture probably only makes sense to those of you with BIG families and more than one toddler. I think we managed to get a pretty good picture of the four of them together -- after about 25 or so shots (each) and TWO cameras. 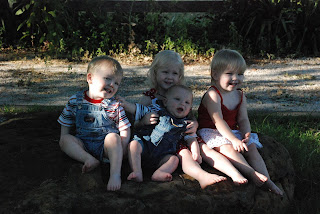 Frances turned 3 on Sunday (the 14th). On Wednesday she had her 3 year check up and Robby had his 6 month. Both got shots. ICK! Info below their pictures. 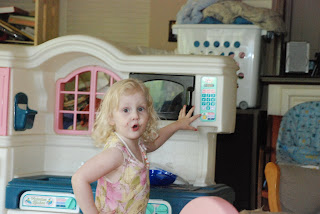 Frances Audrey
3 years
Weight - 33.5 pounds
Height - 38 inches
Nicknames - FancyPants,Franny-girl,
Princess, & Cutie Pie
Interests - Playing dress up, playing
in her new kitchen (she loves cooking for
all of us and then washing up), playdoh,
helping care for Baby Robby,
and saying the funniest things 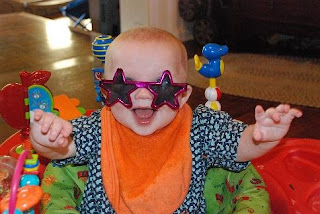 Robby
6 months
Weight - 17lbs 10.8oz
Height - 24 1/2 inches
Nicknames - Little Guy, Microchip, Buddy,
and recently dubbed by Godmama Boo
"Hooch" (think drooly)
Interests - cooing, drooling, crying,
rocking back and forth on hands & knees,
learning to eat, taking his bottle,
(and up-chucking said formula),
and the dragon (alligator???) toy
Ms. Elise gave him for Christmas
Both kiddos got a clean bill of health. Frances is tall, but well proportioned. She was so good.... she didn't cry when they gave her the shot. Of course, that was because the nurse had promised her a trip to the "toy treasure chest". She decided on a Thomas the tank engine sticker and a lollipop. Normally I don't let her have candy, but getting a shot changed my mind.

Robby is finally getting back into his growth curve. He was 75th in weight and 80th in height. His reflux is still causing him to vomit his formula at times and he spits up after every meal. He's finally taking baby food too, though I had to skip step 1 - it was too thin and he hated it. lol (I really need to learn to make my own baby food. It would be better for him I think.)

Dr. K also told me not to interfere too much with interactions between Robby and Frankie - unless Robby's getting hurt. lol That's what I've been doing, but it was nice to hear that. I want them to grow up close, and for that to happen they have to work out their places -- between themselves. Frankie will be closer to Marshie, no doubt, but that's a twin thing.
Posted by Gail at 3:48 PM 2 comments:

I know it's a little late for Christmas pictures, but this is the first chance I've had to blog in FOREVER! lol And guess what I have recent pictures of? hahaha

Robby in his Daddy's arms 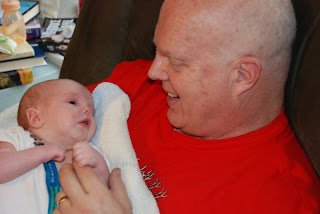 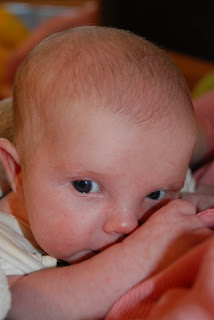 Our little Christmas present - Desse put the bow on his head, and I couldn't resist taking a picture 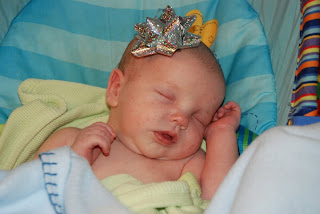 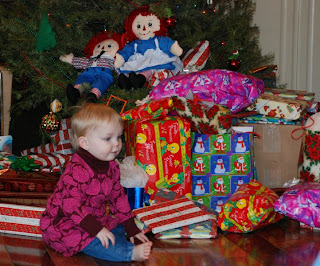 Frankie in Desse's santa hat - I caught this shot mid-step, but it makes it look like he's doing some sort of jig lol 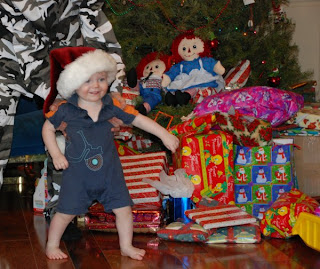 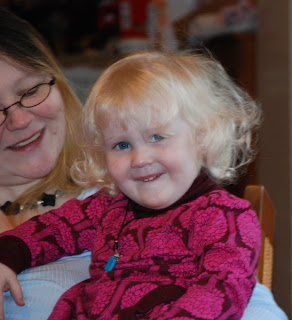 Frances with her new dolly, Kit 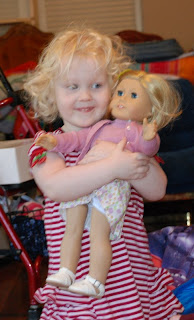 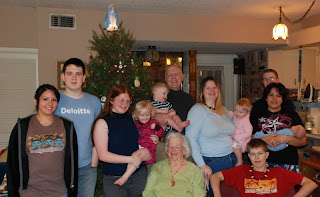 We had a very joyful Christmas. Steven and Michelle came up from Houston on Christmas night. The kids (of ALL ages) really enjoyed the small gifts that they received. Frankie and Marshie were most interested in the idea of giving and receiving gifts, but of course they tired easily. We had a lovely Christmas dinner together in the afternoon. All in all, our day was fill with much love and laughter.

The following day, Friday, we all started coming down with a stomach virus - one that many of us and our friends are really just starting to recover from. Even with sick kids, a sick husband and friends, I will still say that this Christmas was much blessed. I hope everyone else had such a wonderful time with family and/or friends. 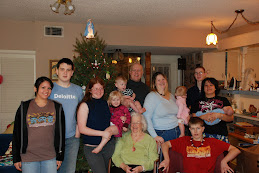 I love watching children learn, interact, and grow - which is probably a good thing with all these kids around! I was a bookkeeper by trade, but I am a mother by calling.

The title of my blog was inspired by Dori from "Finding Nemo". I would have titled it, 'just keep swimming', but the fact is - we're not swimming, we're Growing! lol So here we are with a little "just keeps growing" tune stuck in our heads.

I love to write almost anything, but poetry is really my favorite. This is my first blog, and I don't always have time to update enough, so bear with me.... : )

Other blogs I read